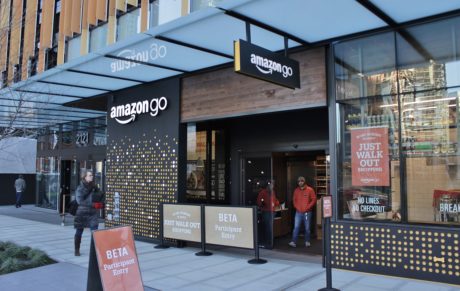 The Internet of Things (IoT) and all of its smart, connected components have subtly asserted themselves into nearly every aspect of our daily lives. They inhabit our phones of course, but also our cars, furniture, appliances, even our beds.

This ubiquitous connective presence supports a seamless, real-time, dynamic digital environment that brings about a lot of opportunities for brands. They’re putting exciting new initiatives into motion that let them connect with consumers in more integrated, natural, engaging ways while they expand their capabilities and learn more about their products and their customers.

Four brands, in particular, are taking amazing steps to advance this convergence of connected tech and digital commerce:

Postmates, the delivery app, has entered into a partnership with Ford’s self-driving vehicle program. The two companies are planning a pilot project in a city yet to be determined, Ford announced at the 2018 Consumer Electronics Show. In addition to testing the technical aspects of the integrated platform, Ford’s experimental collaboration is intended to evaluate the consumer experience itself.

Ford is also working with Qualcomm, AT&T, and Nokia to build an autonomous C-V2X Platform. Qualcomm’s V2X ecosystem is meant to provide a “vehicle-to-everything” connection. This concept includes engaging responsively with other vehicles as well as with pedestrians, roadway infrastructure, and the network. The new embedded cellular technology in self-driving vehicles will be tested out in the San Diego Regional Proving Grounds, according to TechRepublic.

Cellular technology is an important part of how self-driving cars respond to their environments. Qualcomm’s C-V2X solution will be implemented using AT&T’s 4G LTE network, and Nokia’s wireless base stations.

Ikea has entered the home automation marketplace with its Trådfri line of smart lights. These products now have Apple HomeKit support, adding Ikea to the more than 50 brands that work with HomeKit. To enter Ikea’s world of smart lighting, a user needs to have a Trådfri gateway hub, and they need to download the Trådfri app from Apple’s App Store. The Home integration with Siri allows users to interact conversationally with their Trådfri lights, just as they can with many other home devices. Alexa functionality is also compatible, and users can add the Trådfri skill to their Amazon Echo Show. Compatibility with the Google Home system is still in Ikea’s future, but the direction of connected homes is on a clear path.

Mixing entertainment and utility, Ikea also released their “Place” app to work with ARKit in iOS 11. Ikea was a pioneer in using AR in its marketing, but the Place app offers a substantial improvement in the user experience.

Previously, customers needed Ikea’s physical paper catalog to activate the AR images. Now, all access is online from within the app, with many intuitive search options. Furthermore, the 3D sizing of furniture within the user’s space has been greatly improved. Ikea now boasts 98 percent scale accuracy, as well as better lighting and shadow effects.

Perhaps most importantly of all, as a reviewer in The Verge writes, “The app is super fun to play around with.” The sheer amusement value of entertaining AR shopping apps can be enough to stand out from the competition and entice new customers.

One of the early areas where AR stirred up significant market excitement is in the arena of cosmetics. Modiface provides the technology behind the “try-on” experiences of over 80 cosmetic brands. These include Sephora, which is well known for its AR mirror displays, along with L’Oréal, Cargo, Smashbox, and Estée Lauder.

Modiface’s technology is the result of a decade of research at Stanford University, according to its press release. Some of these try-on experiences are available to shoppers on their mobile devices, while others are only available in stores. The apps serve multiple purposes besides the obvious: They customize the brand’s behavior according to the personal data they collect, while also informing companies about the performance of their products.

While Google Glass suffered a notorious market failure, it planted seeds of potential that continue to sprout. The promise of usable eyewear that also provides AR information refused to die. Instead, the concept remained dormant until voice capability finally reached a suitable level of sophistication.

The Vuzix Blade, released at this year’s CES, offers AR-capable smart glasses that look like normal eyewear. They weigh only three ounces and they come with full Alexa integration. The lenses are transparent, so all layers of information are superimposed on a view of the real world. This winning combination, retrieving the failed promise of Google Glass, earned recognition: It was named “Best AR on Show at CES 2018” by TechRadar. China’s Rokid also previewed their glasses at the show, an example of global tech companies embracing the AI – AR union.

Each of the brands profiled above is clearly going through a succession of evolutionary steps that involve a shift in their digital strategies. Their precipitous progress is in part attributable to incredibly creative marketers and skilled developers, but their app accomplishments owe a debt to the developer kits that pave the way—and those are getting more and more sophisticated by the day.

Apple’s iOS 11.3, currently in beta and due for release in Spring 2018, includes an upgrade to the AR developer kit (ARKit 1.5). New AR capabilities in iPhone apps will bring “scene understanding,” which maps out irregular surfaces more accurately and places objects on vertical surfaces—capabilities that Ikea and other interior design companies will be putting to good use.

Androids will also see AR experiences take off this year. ARCore is now available on a limited set of devices, including four Google Pixel smartphones and four in the Samsung Gallery lineup.

As the IoT and AR become more robust and their capabilities continue to expand into every corner of our lives, they naturally exceed the keyboard. The Alexa Mobile Accessory Kit, available later this year, allows developers to add voice activation to an almost unlimited list of connected devices.

Integrated voice recognition controls like this are the next logical step in maximizing the potential of emerging tech. Voice recognition is important because spoken language is essential in accessing a broader range of actions. There are so many possible commands for even a simple AR interface that screen taps or keyboard input become unreasonably complicated. And as an added bonus, the nature of a conversational exchange can reinforce a personal connection between the individual and the digital product. No doubt.

Modiface is one of many brands that intends to add voice-activated capability to their AR mirror experience. Partnering with the independent AI platform Houndify, they plan to launch a conversational “magic mirror” that customers can interact with on their devices.

It seems only a matter of time before the IoT merges fully with AR’s trove of visual information and stirs up even more incredible experiences on the brand side. This blended realm will be controlled by natural language interactions and layered with intuitive visual engagements for the user. The resulting closeness between people and their devices will usher in a new era of seamless, interactive consumer experiences. With brands like these leading the way, it’s shaping up to be a fun time ahead.