What you need to know about coding, even if you’ve never written a line.

This week, we’re going to talk about coding, the building block for all the great (and yes, not-so-great) apps you use every day. But we’ll start with a confession: I don’t know how to code.

I’ve wanted to learn, and I’ve gotten past the assumption that it’s something too difficult to pick up, but apart from getting really good with HTML (the basic language of making Web pages), I’m still a coding novice.

It’s very likely you don’t know how to code, either.

But if you have kids, they may already be learning how to do it. If you have a friend who dreams of making the next “Angry Birds” for mobile phones, they are probably coding or learning how to code. And maybe it’s not too late for the rest of us to dip our toe in.

So let’s, methodically and line-by-line, talk about coding. We’ll learn together.

What is coding? Coding is essentially the same thing as programming: It means writing the language that makes up computer software, mobile apps, Web pages and even all the behind-the-scenes magic that makes Facebook so creepy.

There are lots of coding languages, including C++, JavaScript, Python, Ruby, Swift and many others.

Code can consist of millions and millions of lines for one program (say, Microsoft Word) or a simple command from the Website CodeConquest.com written in Python: print ‘Hello, world!’

All that does is display the text, ‘Hello, world!’ on a screen. Hey, that coding seems easy!

One nitpick about the word “coding,” though: Though coding as a verb is synonymous with programming, in the hierarchy of tech companies, a “coder” is not necessarily a “programmer.” A programmer may have many more software-development responsibilities than just writing code. Nit-picky? Maybe, but don’t tell that to a programmer!

Coding is hard, right? Coding can be very complex, but picking up the basics doesn’t have to be. Tamara Hudgins, the executive director of Girlstart, says, “Learning to code is NOT hard. Can you write a sentence? It’s essentially the same. You learned a linguistic convention just as every user of a language does.”

Girlstart is an Austin-based organization that since 1997 has taught coding and many other science, technology, engineering and math (STEM) skills to K-16 girls.

Hudgins said that kids in particular tend to have a quicker capacity to learning coding as a skill, “and that is also because, just like learning a language, this conceptual framework is best developed early. Once you make assumptions about the world, it’s hard to rely solely on simple logic.”

Some countries, including England, have begun to add coding to their national school curriculum, teaching children as young as 5 how to code.

I’m a late bloomer. Am I hopeless? “It’s better to code earlier, but even if you don’t, there are still many reasons to pick it up,” Hudgins said.

Being an entrepreneur in tech who wants a better understanding of what their contractors are doing, journalists who want to build better tools to collect and manage data for their jobs and amateur app developers are just a few grown-up reasons to learn coding, whether in formal classes, at local meetups or internally.

Coding may also help you understand programming jokes, like this one from Kunal Kanojia on the Web site Quora: “Q: What’s the object-oriented way to become wealthy? A: Inheritance.”

I’m not a techie. Why should I code? Conrad Stoll, consulting architect at Austin’s Mutual Mobile, says his company did an exercise two years ago inviting anyone at the company to come learn to program. About 30 people participated. “There’s been a stigma in the past that marketing or sales don’t need to worry about it. We kind of hate that notion,” Stoll said. “We’re really trying to change that to make everybody aware of how programming works and what it’s like to develop for iOS and Android.”

Stoll said mobile phones in particular have made the notion of teaching code more accessible. “People relate much more to things like apps. It’s a very personal thing. You download dozens or even hundreds of apps in your phone.”

A recent opinion piece in WIRED suggested that the drive to teach the world coding may be misguided and that coding may not be for everyone.

But there are benefits to the learning itself that go beyond the creation of apps or getting a job in tech, Hudgins said.

“Coding is important because it fosters logical and critical thinking,” she said. “Regardless of what a child does when they get into high school and college, we can all benefit by using logic to help us understand the world around us.”

At a recent speaking engagement at Texas State University, tech luminary and professor Bob Metcalfe, who co-invented Ethernet and founded 3Com, said, “Coding is a fruit of civilization. By knowing it, you think better.”

Who teaches coding? In recent years, Austin and other tech-centric cities have exploded with opportunities for would-be coders. Apart from university and secondary school courses, there are formal programs such as MakerSquare, an immersive eight-week course that next begins in Austin on March 2. Austin Coding Academy promises code novices can be “job-ready in nine months.” Classes there start in June.

Programs like Girlstart offer after-school programs, summer camp and a STEM Conference where these skills are developed.

Groups including Women Who Code, Girl Develop IT, PyLadies ATX and She Hacks ATX are specifically geared to teach women coding skills.

But there are plenty more classes, meetups and special interest groups in town — some require payment, but a surprising number are free.

Why teach coding? In December, Stoll and Mutual Mobile iOS architect Rene Cacheaux taught a group of fourth-graders from Dripping Spring Elementary School how to code as part of an international event called Hour of Code. The premise: that anybody, anywhere can learn how to code. According to the event’s Web site, nearly 101 million students in more than 180 countries have participated. 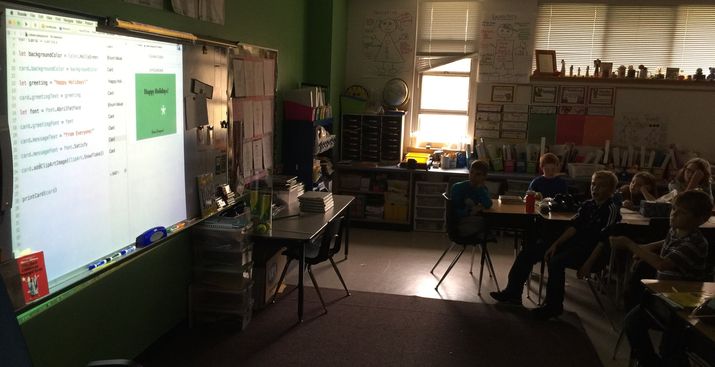 Fourth-graders from Dripping Springs Elementary School got a lesson in coding the Swift programming language by Conrad Stoll and Rene Cacheaux from Austin’s app development company Mutual Mobile in December. The lesson was part of the Hour of Code initiative, held in more than 180 countries. Source: Austin American-Stateman

The Dripping Springs students learned how to design a Christmas greeting card they could print out and take home using the coding language Swift.

For kids who’ve grown up with tablets and smartphones, Stoll said, it was an easy fit to get their minds around building an app for such devices.

“We were blown away by how interested they were,” Stoll said. “All of them know what an app is. Now they can associate this skill of programming with building an app.”

Stoll’s excitement about the Hour of Code is obvious. He likens it to being a wedding photographer and wanting to teach a class to share your love of taking photos.

“You’re working in an industry, you want people to be excited about the type of work you’re doing,” he said.