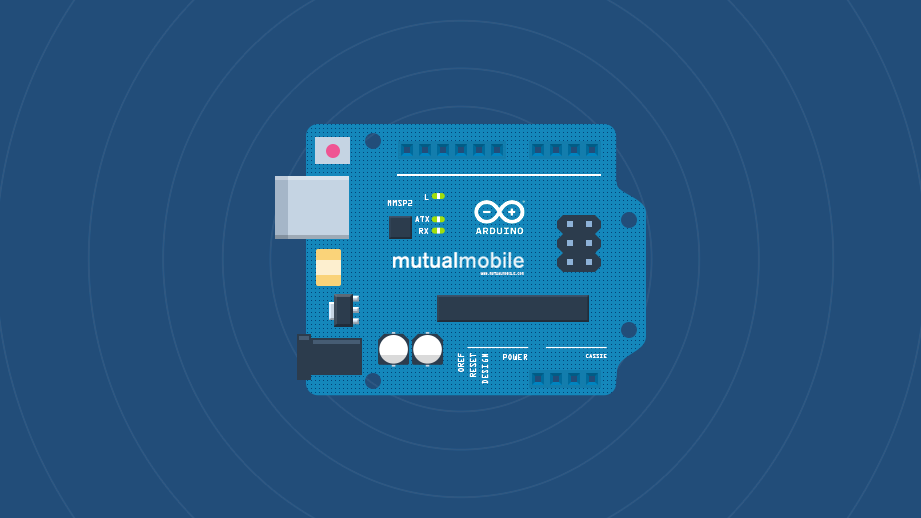 Hacking IoT Devices of the Future

Arduino has only been around for about 10 years, but their open-source computer hardware and software has been gaining a following ever since. Their microcontroller-based kits were produced as an easy way for novices and professionals to turn their connected device ideas into reality, so we threw a hackathon to do the same.

We decided to get our hands dirty working with the IoT devices of the future and giving our people the ability to learn more about IoT, sensors, and connectivity. Similar to to our Blend Day, a company-wide all-day hackathon, we wanted to open this hackathon to the whole company, meaning not just designers and engineers, but also marketers, DevOps, HR, and more could join in the fun.

In addition to Arduino’s, sensors, motors, and kits, we also utilized Silicon Labs’s Thunderboard and Punch Through Design’s Light Blue Bean. The Thunderboard is similar to the Arduino in that it is a demo board with all the ability to develop advanced wearables and connected IoT-nodes. The Light Blue Bean is a low-energy Arduino-compatible microcontroller that is cross-platform compatible and equipped with sensors such as accelerometer, temperature, and RGB LEDs built into the board. Both boards are fun and powerful platforms that offer Android and iOS SDKs.

Having multiple “toys” to choose from, and an evening of play, what exactly did the project groups create?

Led by Ron Lisle and Thaddeus Ternes, the project one team worked round the clock to create a standup desk prototype demo and iPhone app. The hardware was built using Punch Through Design’s Light Blue Bean and a heat and motion sensor. The prototype senses where the user is and sends a notification to the iPhone via BLE. The notification in this demo showed that a light was on and that the user was away or at their desk.

In addition to the connected desk prototype, Thaddeus worked on his own project involving Pinewood Derby cars with colleagues Amy Garrett, Ron Lisle, and Beth Gerstenfeld. They built a racing app that talks to the derby car via Silicon Lab’s Thunderboard, and connects to an Apple TV. In addition to statistics, there’s a slow-motion camera at the top of the derby race track to show exactly who finished first, all viewable from an Apple TV.

One of the things learned through Arduino prototyping was that mechanical aspects of a project can cause problems. We can build amazing software, and with Arduino some decent electronics, but inevitably it is the moving parts or connections that can cause a prototype to fail.

One of the unique aspects of this hackathon was getting the chance to work with hardware, and that’s exactly what drew Robert Amato into working on his project. The Arduino platform is so accessible that it allowed many of our engineers to let their imaginations run wild. Robert wanted to work on a project with his daughter. They started simply by getting a temperature and humidity sensor up and running and proceeded to create software to display the results. Arduinos provided a platform that allowed for fast, accurate results that made for a fun family project!

Similar to Robert Amato’s reason for participating, Charles Henry came into the hackathon not knowing anything about programming or Arduinos. Charles had an idea for a touchdown football hat that would illuminate with multiple LED lights anytime the user’s team scored a touchdown so they could look like maniacs. The project started with learning the basics about programming an Arduino Mega board to control and sequence multiple LEDs based on user input.

He was thrilled to make the light on the Arduino board blink. While adding a toggle button, he learned about debouncing and how the Arduino program runs faster than the user’s interaction with the button, adding a short delay resolved this issue. He is planning to add more LEDs and experiment with new lighting sequences.

After a recommendation from a colleague, Braden O’Guinn and Sean McMains worked together on a motor drive for time lapse photography. The idea was to pull a camera across a rail at a steady speed over a long period of time – typically something like 2.5 feet of motion over 15 minutes. In this way, a photographer can create time-lapse images that smoothly pan. It’s a great effect, but nearly impossible to do manually.

They hooked up a stepper motor, which can be advanced in very precise intervals, to an Arduino and worked on code to make it move at a specified rate. Unfortunately, the math never worked out, and things kept taking longer than estimated. After some frustrated Googling, they found the culprit: changing the state of the output pins on the Arduino was taking a finite amount of time for which they hadn’t considered! They didn’t have time to revamp their math, however, they now know what they need to do and are set up to add other niceties to the system, like an LCD screen and controls that allow photographers to adjust the desired time.

Don Holmberg used the Arduino Mega to create a little music box that he could combine with his pipe organ clocks and trigger them via an iPhone app. First, he interfaced a 2 line by 16 character LCD module, a speaker, 2 buttons and an LED emitter. The two buttons are used for selecting songs and the other is for playing the currently selected song. When pressing the play button, the LED shows a flashing sequence, then the music box plays the selection. He programmed 3 songs for the Arduino by using the provided libraries for managing the LCD display and for generating sounds to play the tune. He coded the sketch with software arrays for each song, which contained the frequencies and durations of each note in the song. The end result was a nice little music box like the old wind up toys, except no winding and the user can select different songs!

Want to see some of the projects in action? Watch the video recap below, and stay tuned for our next hackathon!