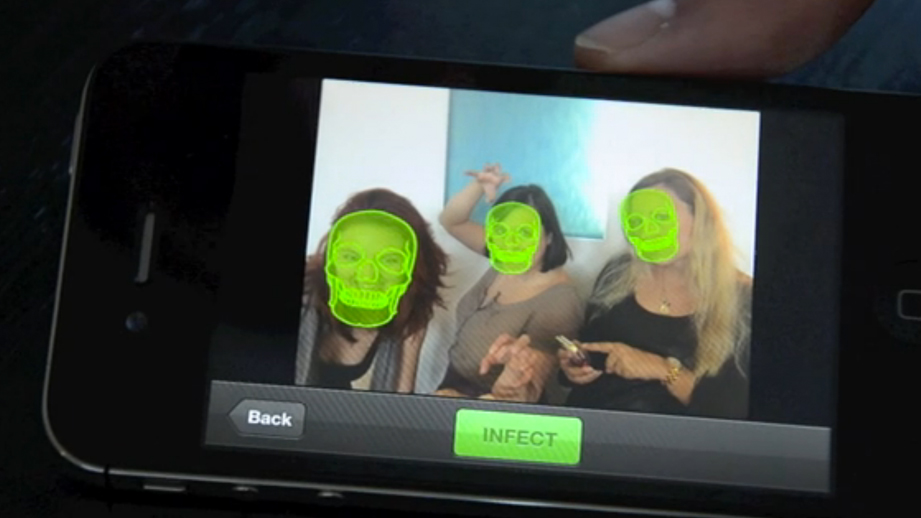 How can Apple’s latest iOS software update turn a crowd of people into a horde of hungry zombies?

Among the hundreds of new features included in iOS 5, facial recognition is one of the most promising and presents use cases ranging from novelty to security.

In the spirit of Halloween we decided to use the feature, which can identify faces and accurately measure the distance between features, to place creepy zombie faces on our staff. This is a simple example, which you can watch in the video above, and it only scratches the surface of what facial recognition can do.

Apple has been securing facial recognition patents for quite some time now for everything from the ability to match who you have taken a photo of to those people listed in your contacts, to on-screen manipulation similar to what we see with Kinect. Thus far the only direct application of facial recognition in Apple’s native apps is in the camera, but it’s open for developers to use and apps are already showing up in the store that tinker with this new ability.

For marketers the connection is pretty direct. They have already been using primitive hacked versions of facial recognition to virtually put items of clothing on shoppers, or on a more simple level just letting them overlay images of clothing onto their photo. Real facial recognition makes this process easier and better looking than ever. What’s important to recognize though is that facial recognition still requires a level of processing power that iPhone 4 isn’t quite prepared for. This is why Apple only included the real time camera face tracking in the new iPhone 4s and not in the overall iOS 5 update. Older model devices can easily do facial recognition from a photo, but they can’t yet accomplish it in real time without greatly compromising the functionality of the app.

Facial recognition also offers promise of a real biometric security device for our phones. Scam fingerprint scanning security apps have been popular for ages, but they do little more than run an animation and offer no protection. Rather than a password gateway, our phones could soon recognize our faces and allow us access to the phone, or even offer multiple user accounts for a phone.

And finally, although it sounds a bit creepy, facial recognition could offer us new insights into how users are experiencing apps. By tracking where a user’s pupils move across an app,  we can more accurately understand their difficulties. This sort of pupil tracking could also one day be used to make the iPhone an ideal choice for the handicapped, able to control their device simply by moving their eyes across it.

We are in the very early stages of this technology, and not just in mobile. Devices like Kinect are presenting new possibilities and ethical quandaries every day. But we need to remember that facial recognition isn’t just a new gimmick and that as it matures, we need to keep pushing for new useful applications.