Mutual Mobile sizes up the iPhone 6 and 6 Plus

You know those people who sacrifice their sleep and sanity to be one of the first to wrap their fingers around a shiny new Apple product? Mutual Mobile is full of them. Want proof? 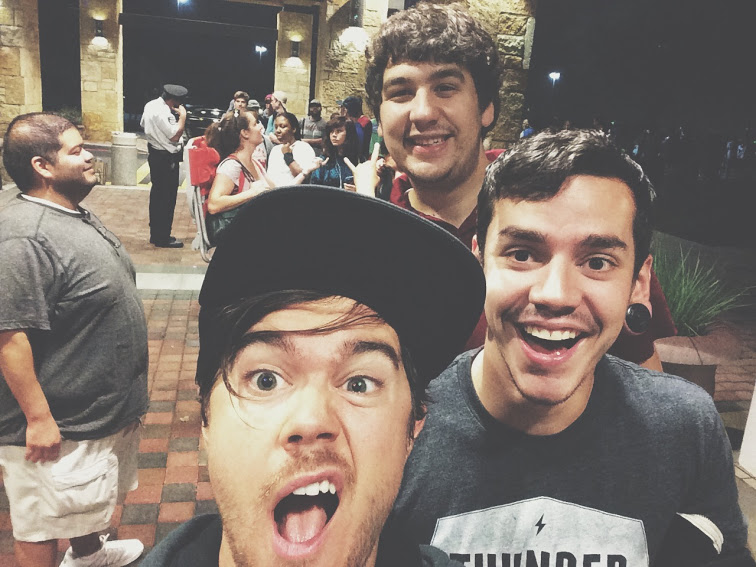 The delirium is setting in.

Behold, the Three Amigos of our Infosys Team waiting in line for as many iPhone 6 Pluses as they could purchase before the “Geniuses” cut them off like a responsible bartender. “The excitement in the air was palpable,” recalls information systems support manager and photo-frontman, Kris Monier. “The mall had made the decision not to let any patrons line up before 6am, so we were all in a bit of a stand off with all the other cars. We decided to light up our parking lights when we arrived at 2:30am to ‘stake our claim’. Finally Kyle went up to the security guard and informed him he would have a full blown, four alarm, Wal-Mart-Black Friday type event on his hands if he decided to wait until 6am to start the line. Security relented, and they let us line up at 4am.”

Yes, they were at the front of the line. Yes, they got there at 2:30 in the morning. And yes, they still came into work the next day. Why? Because they, like all Mutual Mobile employees, love viewing, holding, and most importantly, discussing all the latest and greatest tech on the market. Here’s what our innovators are saying about the iPhone 6 and 6 Plus after just under two weeks of experimentation.

Overall, we’ve been hearing a lot of “This is AMAZING” and “Best iPhone yet” echoing through the halls of our Austin office. But why are the iPhone 6 and 6 Plus receiving such high praises?

According to Kyle Varga, associate director of the Information Systems team (and the tallest man in the picture above), it’s all about the screen. “It’s bigger, it’s clearer, and it’s really just better.” Kyle explains. “I also really like the rounded edges. It feels good in your hand, but unless you’re a professional basketball player, one-handed use is probably out of the question.”

However, bigger isn’t better in everyone’s eyes. iOS consulting architect Kevin Harwood felt the new size of the iPhone 6 was big enough for him. “I value one-handed use, which is why I went with the 6,” Kevin explains. “You can definitely tell the screen is bigger, but it doesn’t feel too much bigger. However, when you go back and look at an iPhone 5, the iPhone 5 screen certainly feels small and compact.” 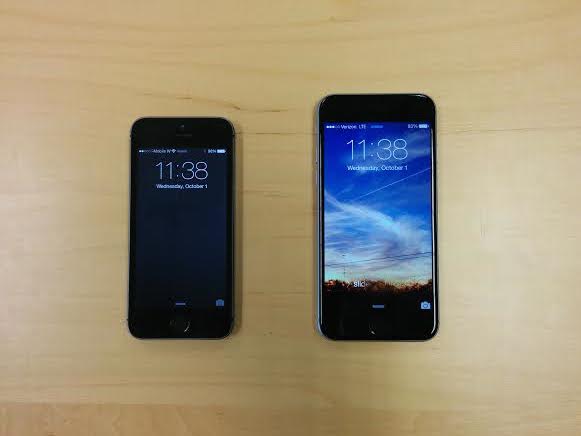 Guess which one is the 5s.

Kris is right there with Kevin on the 6. “I use my phone to track my runs. There’s no way I could run with that giant phablet strapped to my arm. Therefore, I opted for the non-plus.” Kris was also thrilled with the one-handed usability of the palmable hardware. “It’s the most ergonomic device Apple has ever created. It feels so great in my hand and typing is a breeze. The screen is a bit larger, but I’ve adjusted just fine.”

As much as Kevin likes the larger screen size and beveled edges, what he really loves about the iPhone 6 is Touch ID. “This is my first phone with Touch ID, and it is incredible. I’ve been throwing around the phrase ‘Effortless Security.’ It is just so fast and so accurate. Now add the fact that Apple is opening up Touch ID to developers in iOS 8, and there is a lot to love about it.”

“Touch ID is great,” Kyle agrees. “I decided not to get the 5s, because the fingerprint scanner seemed to be the only difference between that and the 5. I didn’t realize what I was missing. It’s all the speed and convenience of leaving your phone unlocked, with all the security of a zillion-digit pin number. I can’t wait to start using it with Apple Pay.”

A picture worth nearly 1,000 dollars

Kyle, Kevin, and Kris had a lot of nice things to say about the new and improved cameras in the new and enlarged iPhones, but for a true assessment of the iPhone 6’s photo-taking abilities, we’re going to leave it to the guy who’s been photographing UT athletic events for the past ten years.

“The first few test frames I captured with the iPhone 6 Plus were very impressive,” noted Conrad. “Color was incredibly accurate, focus was good (and fast, and automatic). Sharpness was also good. To be honest though, it’s easy to make photos look good on the iPhone 6 Plus’s incredible display. Yes the camera is good, but its the display that makes the photos look incredible.” 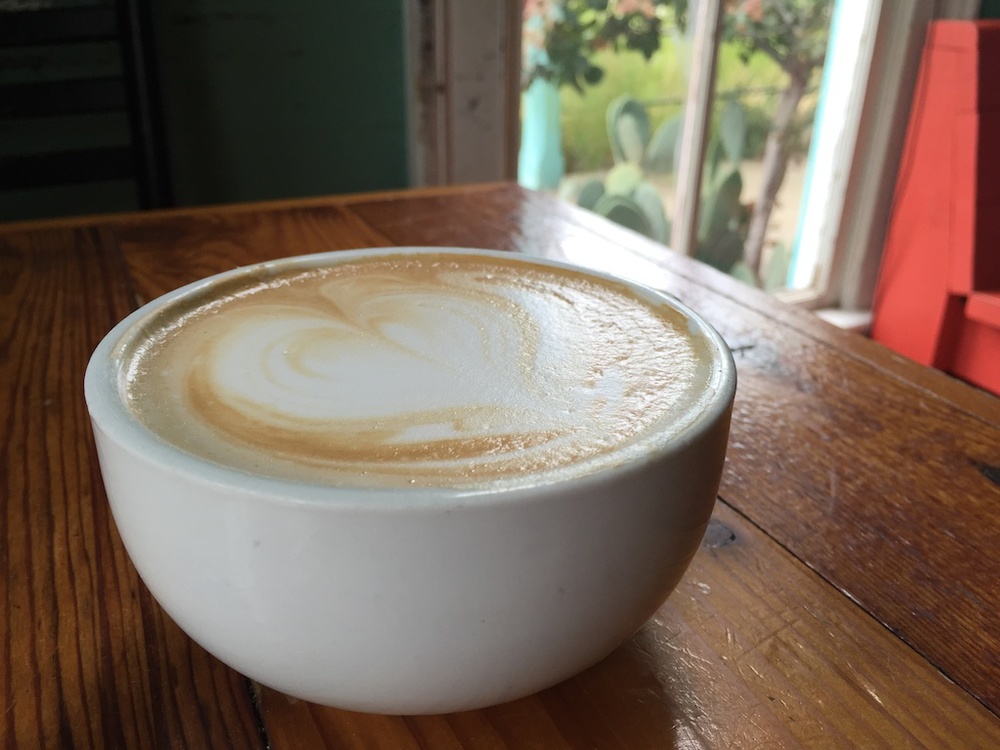 Coffee and cacti, courtesy of Conrad’s iPhone 6 Plus.

Although the pros of the iPhones clearly outweigh the cons, it would be sloppy journalism to ignore the few grievances our employees found with their new-fangled hardware.

Whether it was Kevin on his iPhone 6, or Conrad and Kyle on their bigger Pluses, everyone agreed that most apps remain optimized for the specs of previous iPhones. “Apps that aren’t yet built for the iPhone 6 definitely feel scaled up and are a bit blurry,” says Kevin. “I’m ready for devs to get them upgraded.”

For Conrad, a poorly rendered app is a real deal breaker. “I’ve already switched from Tweetbot to Twitterific because the Twitterific support for the screen is that much better. I haven’t seen any RSS clients that have been updated yet, but that will instantly make the phone more usable for me when one is. We’ve been in the process of updating two apps that I use on a daily basis at Mutual Mobile, and I already can’t imagine going back to the non-iPhone 6 Plus versions of those.”

In addition to his issues with legacy apps, Conrad mentioned a few things worth typing about the new keyboard. “When I first saw the new landscape keyboard with a bevy of special keys I thought it sounded like a great idea,” Conrad began. “But after using it, I have two problems. First, all the letter keys are in the center, which is too much of a stretch to comfortably type on–even for me, a guy with pretty large hands. Second, because there is now so much stuffed into that keyboard, the keys themselves are slightly too small of tap targets for me to comfortably type on. I was wondering if this keyboard would win me over to start using my phone in landscape orientation more, but the answer so far is no.”

Just kidding! No one at Mutual Mobile is really concerned about #BendGate. Yes, with the right amount of pressure the iPhone 6 Plus can bend, but you could shatter your entire iPhone 1, 2, 3, 4, and 5 screen just by dropping it an inch off the ground. That certainly didn’t slow down their sales. If you avoid putting it in the pocket of your skinny jeans, you should be all set.

The iPhone 6 and 6 Plus have already passed our sniff test, and things are only going to get better. Once developers get their mitts on Touch ID, Apple Pay finds its way to stores near you, apps get with the picture, and the first wave of iOS 8 updates knock out those uncharacteristic bugs the blogosphere has been buzzing about, the iPhone 6 and 6 Plus will prove to be another undeniable winner for Apple.