Physical Games in a Digital World

Roll some dice. Flip up cards. High five the person next to you. These are all actions common to gaming in real life. How do we translate these simple things into a digital game? Let us delve into digital implementations of physical games.

Created in 1995 by Klaus Teuber and published by Kosmos, Settlers of Catan has spawned multiple expansions, won numerous game awards, and is played by millions of people around the world. For those unfamiliar with the game, the goal is to gain 10 victory points. These points are gained through various methods: building cities, armies, and special cards. Through the course of the game, you will make friends and enemies in both trade and in blocking. In a real life game, you are able to read the emotions of other player’s faces and get to see both their elation and frustration as the game progresses. You can admire the thought that went into each move of a game piece. Give the die a lucky kiss instead of leaving things up to a random number generator. 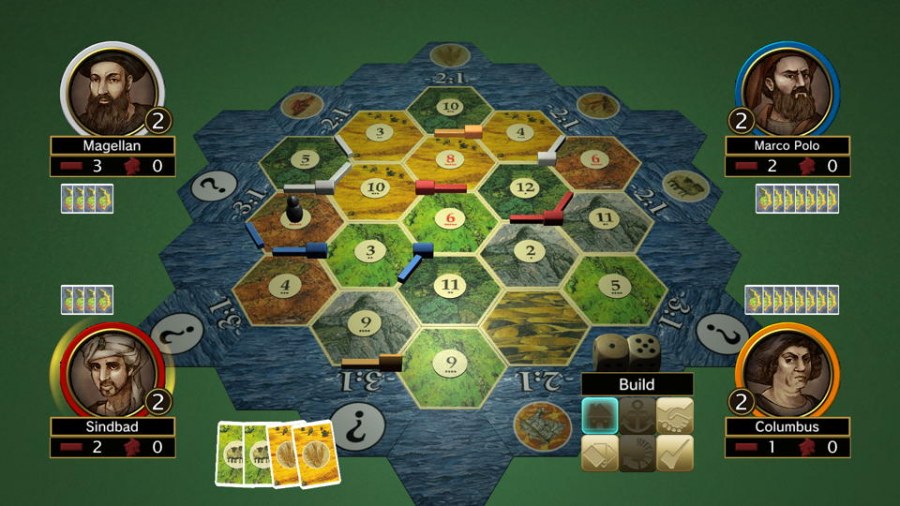 So how has the game made the transition into the digital age? The two console releases are more than serviceable and include all the elements necessary for a game of Catan: changing boards, digital game pieces, rules enforcement, and online chat. Some elements have been improved over the physical game. One of the elements that holds many people back from enjoying board games is complicated rules. Catan is able to solve this issue with strict rules enforcement and an excellent tutorial. While the closeness of playing on the same physical board of the game is gone, this treatment of the game is a worthy of its namesake.

Let’s examine another game that has been around even longer than Catan and also enjoys a large following, Magic: The Gathering (Hasbro/Wizards of the Coast). There is a good chance that if you were in middle school in the 1990s, you remember either playing this game or seeing it played. The game still has a large following, even after over two decades from its original release. Explaining the game mechanics would require an article unto itself, but in short:

While Magic still enjoys terrific popularity in the physical gaming space, it has struggled to make the transition into the digital space. The online client, known as Magic Online, originally launched in 2002 and has gone through several incarnations since the original launch. The latest version of the client, v4, translates much of the paper Magic experience into digital form. Players can enter into tournaments, play games for fun, trade cards, and enjoy strict rules enforcement of the game itself. For everything the online client does right, it does so much else wrong.

Unlike Catan, Magic is hard to get started on for new players. While there is a part of the client specifically meant for new players, no in-game tutorial is offered. Players are left to learn from friends (time consuming and not always possible), trial and error (time consuming, expensive, and frustrating), or online tutorials (time consuming and doesn’t always translate well to the Magic Online interface). For experienced players, the interface itself is hard to get through.

Here’s what you are presented with when first logging into Magic Online (I’ve blocked out names for privacy reasons). 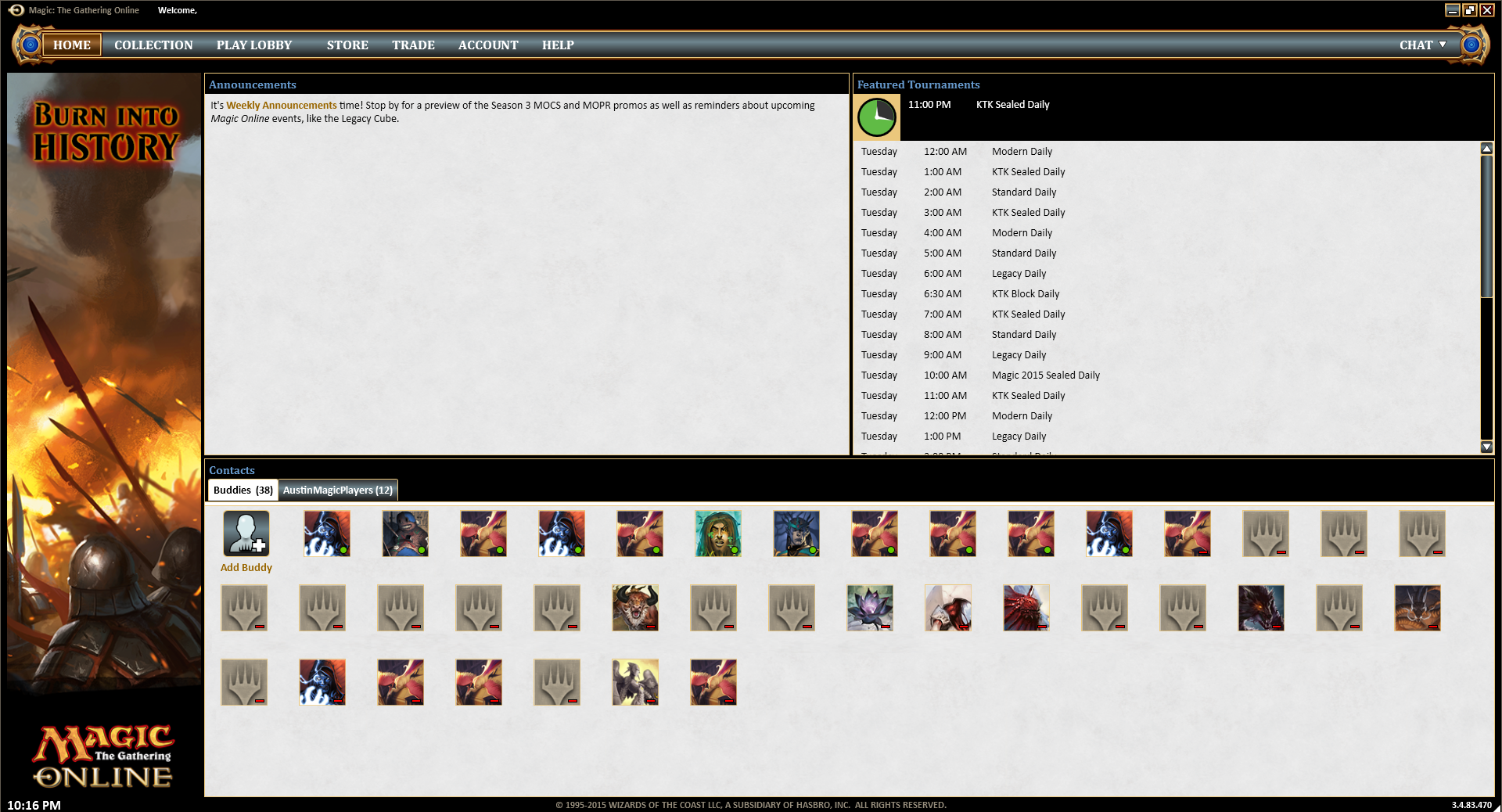 While each section is plainly named, this client has the look and feel of a productivity application instead of a game. I’m here to have some fun and sling spells, not do my taxes. Without going to another section, it is not entirely clear what to do from here.

Another problem throughout much of the application is the sheer amount of white space. While there are instances where white space can be good design, the client makes little use of its available canvas. On the above home screen, the announcements section has a few lines of text, but nothing to visually draw the user in and offer interesting or important information. A possibility would be to include part of the Magic website in this section to further engage users in the Magic brand.

The collection interface, where a user can view all of his or her cards also harkens to a productivity application. 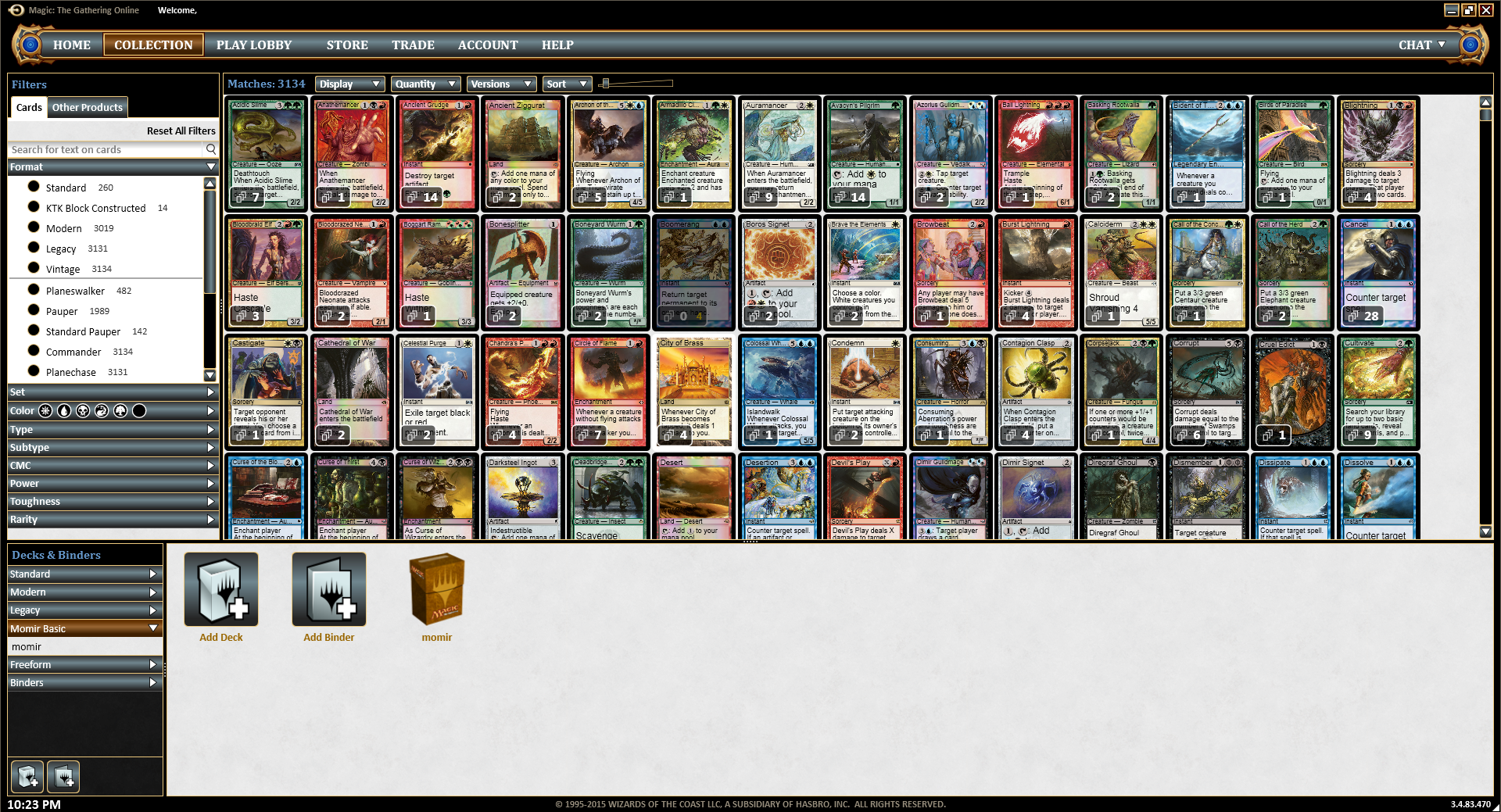 The default collection view is ambiguous. Without much space between the cards, they visually run together and can easily overwhelm the user. There is a litany of options on the sidebar, and while nice to have, are not all necessary by default. User data should be collected to find out which options are used most often. Then those options can be displayed by default, while still giving the user the option to customize, instead of the above mess.

The scope of this article is not going to go into detail on everything that could be better about Magic Online. It is enough to know that there are a number of UI/UX issues (such as the ones I have outlined above), server issues (weekly daytime downtime, crashes, capacity problems), and performance issues (memory leaks).

The real missed opportunity here is the lack of a mobile Magic client. In today’s world, your average Magic player is going to have access to some flavor of smartphone and/or tablet. To not even consider this still growing medium is inexcusable.

For everything Magic Online misses on, a new competitor, Hearthstone, does those things right. I’ll let this picture of the menu speak for itself. 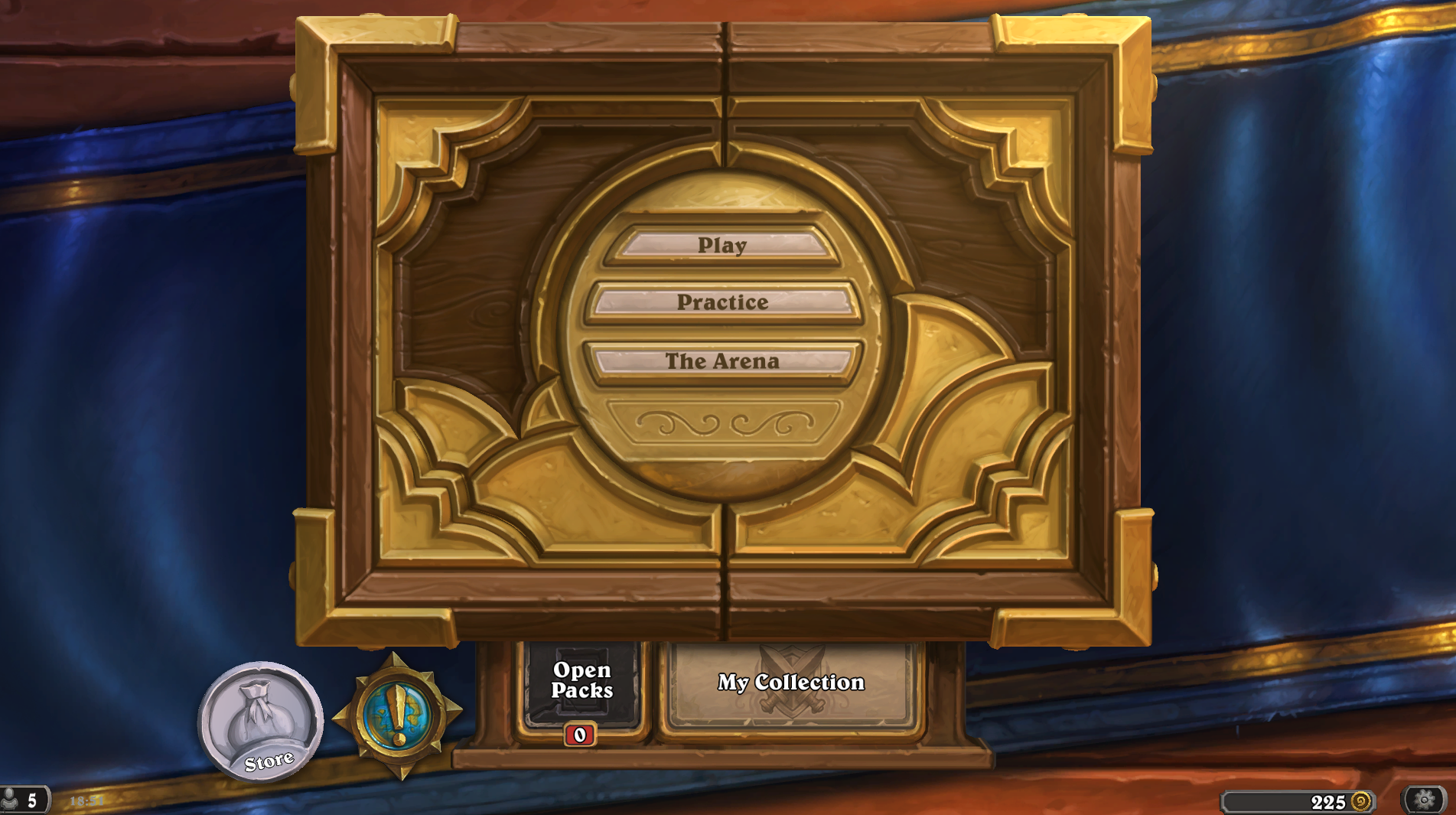 Now this looks like a game. The screen conveys information in a clear and concise manner. The unused space is filled in with attractive art and really adds to the look and feel of the game. The menu options are placed directly in front of the user for easy access. The ancillary options are given hooks through attractive colors to make them “pop” off the screen.

Let’s look at the collection interface for Hearthstone. Once again, the interface here is very clean. The cards are easy to read and well spaced. The art is attractive and the space is well utilized. The number of options the user is given is minimized to keep this streamlined look and feel. 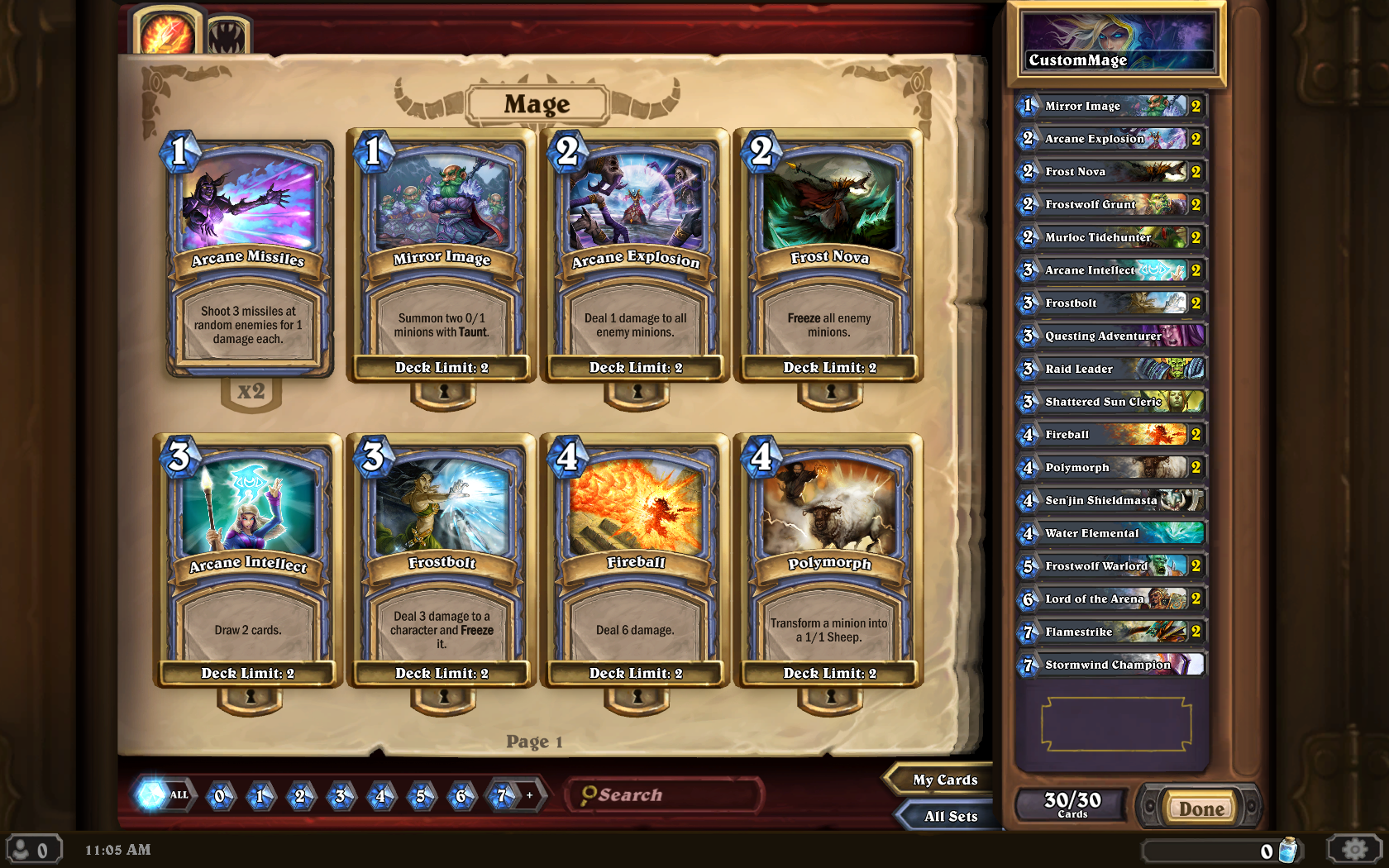 We are only scratching the surface of Hearthstone, but Blizzard has gotten many important aspects of this game right from the start: matchmaking makes sense, leagues are easy to join, an attractive UI/UX experience, a mobile client, an easy tutorial for new players to get started, a good free to play model, a low number of software bugs, and the list goes on.

Hearthstone has one thing going for it that neither Catan nor Magic enjoy. While it harkens back to its physical brethren, it is a purely digital experience. Perhaps Blizzard and Hearthstone are leading the way for the next wave of card and board game makers to follow. This is not to say there is not room for the physical to cross over into the digital realm, but the bar has been raised, so to speak. Kosmos, Hasbro, and Wizards of the Coast would do well to look to Blizzard for guidance going into the future.