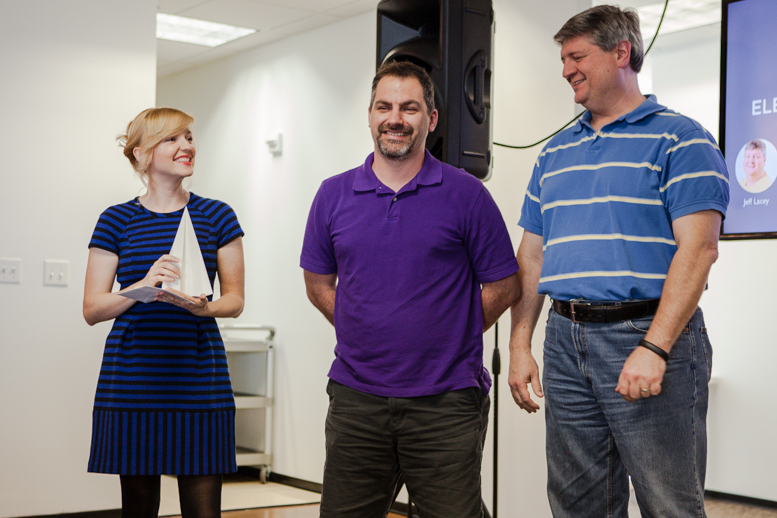 When a new technology hits the market, Mutual Mobile can’t help but tinker around with it. Our latest source of experimentation was the Bluetooth low-energy (BLE) transmitter, most commonly referred to as a beacon. Similar to our Wearable Tech Hackathon, we split our talented employees into teams of designers and engineers and set them loose on Kontakt micro-location beacons. After an evening of brainstorming, coding and beer drinking, two prototypes reigned supreme.

And the winner was…

Winners of the Beacons Hackathon

Taking home our first-ever 3D-printed trophy, and a roomful of applause, was a beacon-enabled exercise app called Elevate Gym. The brains and brawn behind this concept include iOS engineers Jeff Lacey and Dan Murrell, along with visual designer Jessie Sebastian. In the course of a night, these three fierce competitors turned their Kontakt beacons into a virtual fitness trainer suitable for everyone from Arnold Schwarzenegger to Arnold Schwarzenegger.

The concept is pretty fascinating. When a user enters the gym, their phone detects a beacon at the entrance that checks them in and pulls up their workout profile. From there, the user can see previous stats and figure out which body parts they need to beef up on that particular day. Once they’ve thrown their bag in a locker and filled their water bottle, beacons guide them through a series of exercises that cater to their experience level. Once the user completes a station, they simply check it off from their list and move on to the next beacon.

Another beautiful thing about this beacon technology is its ability to teach users how to properly perform new exercises through brief video clips. As helpful as instructional illustrations may be, it’s much easier to learn a new workout by seeing the movements in action. This feature will benefit users both by increasing the effectiveness of their exercise and reducing their risk of injury.

Future iterations of Elevate Gym will also allow gym owners to monitor machine usage and class attendance via beacons. As members move about the weight room and fitness studios, beacons will keep track of peak workout times and popularity of equipment, letting owners know when and where to invest their resources. Trainers will also be able to use apps like Elevate Gym to monitor their client’s progress and keep them engaged through a scavenger-hunt-style workout format, but that’s an enhancement that will require more than one evening of tinkering.

And the almost winner was…

Runner ups of the Beacons Hackathon

Coming ever so close to taking home our first-ever 3D-printed trophy, but still earning a roomful of applause, was a beacon-enhanced version of Hide-and-Seek called Bomb Squad. The team who successfully kept their cool in the Mutual Mobile Hurt Locker consisted of iOS Associate Director Sean McMains and Senior iOS Engineers Andrew Frederick and Christopher Gibbs. Despite the ominous name, Bomb Squad is a game that will be enjoyed by children and adults of all ages.

The rules are simple:

The concept may not be mind blowing, but Bomb Squad’s potential certainly is. With enough space, participants and imagination, this 21st Century take on Hide-and-Seek could be revolutionize a neighborhood game of capture the flag or be utilized as a full-blown counter-terrorism exercise for the military. Long story short, it’s a blast.

Although Elevate Gym and Bomb Squad took home the top prizes of the evening, every team in our first-ever Beacons Hackathon deserves a round of applause. The innovations they produced could be used in just about any market segment you can imagine. For tourists, there was an event app that turned Austin’s annual Formula 1 race into a fully-interactive experience. There was also an app that brought the National History Museum to life like that family-friendly Ben Stiller Movie.

For the kiddos, there was a high-tech version of the popular swimming pool game, Sharks and Minnows—however, this one would have to be played above water. For drivers, there was a parking meter app that allows users to pay for their spot via beacon and smartphone. And the solutions for businesses ranged from an extremely useful inventory app, to a meeting-space manager, to an app that helps speakers determine how well they are doing by allowing audience members to anonymously vote whether they are bored and engaged with the presentation.

Mark Killian is a Copywriter for Mutual Mobile._